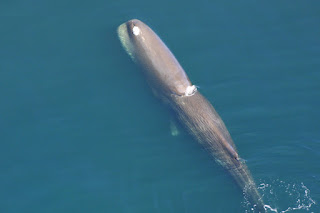 I recently gave a talk at the New York Marine Education Association titled Four Emerging Sustainability Trends and How Marine Educators Can Ride the Wave and one of the four themes focused on the greater awareness and concern there is around ocean pollution, particularly plastic pollution. It is estimated that about half of all sea turtles have eaten plastic and that all sea birds have eaten plastic during their lifetime. Much of the plastic that we see flying around as litter ends up in oceans. Plus, many parts of the world have limited waste management infrastructure. As a result, waste that is dumped higgledy-piggledy on the landscape can eventually make its way to the ocean.

The New York Times is reporting today that a sperm whale that washed up dead on a Scottish coastline died from ingesting over 220 pounds of trash that included netting, plastic, and ropes. The article notes that many marine mammals have been found dead in recent years with plastic in their stomachs.

Marine educators are in a unique position to utilize their knowledge about marine ecosystems to help people to understand the impact trash has within these important systems. Waste and pollution should be an important part of any marine science curriculum. As my readers know, plastic isn't the only problem. There are crucial problems with nutrient wastes that are creating dead zones all over the world. Plus, there are emerging issues due to ocean acidification caused by greenhouse gas pollution.

The sperm whale noted in the article is not just a symbol of what the world is facing. It is clear evidence that we need to act quickly to try to solve the serious problems associated with marine pollution.
at December 03, 2019