This is the ninth post in this blog series, Sustainability Case Studies, that is based on the book The Palgrave Handbook of Sustainability:  Case Studies and Practical Solutions edited by Robert Brinkmann (yours truly) and Sandra Garren and published by Palgrave Macmillan in 2018. Each post in the series will comment on the content of the chapter as well as some general take-aways or practical teaching or personal/organizational initiatives that could be gleaned from the chapter. Links to previous posts on the series (including the post that introduced the series) follow after the chapter review.

This chapter is titled "Waste Management Outlook in the Middle East" and is written by Salman Zafar, the founder of EcoMENA in Doha Qatar. The chapter looks holistically at the waste issues in the Middle East and then moves forward to discuss the situation in several countries. The chapter concludes with short sections on lessons learned and challenges and barriers. 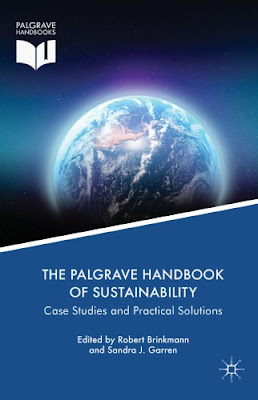 Overall, the waste management situation in the Middle East is problematic. The region's high income countries have some of the world's highest consumption rates that are coupled with high per capita rates of waste generation. Waste is generally poorly managed across the Middle East with little access to recycling. In addition, most of the waste ends up in unsanitary landfills which can cause an array of environmental problems. Litter is particularly problematic and there is considerable informal and formal dumping in deserts and coastal waters.

As Zafar notes, waste is treated in the Middle East as a waste and not a resource. As such, there are few policies to try to reduce waste or to collect it for recycling or energy production. Because most waste collection is done by public agencies, there are very low costs for waste pick-up and tipping fees are low. Thus, there are few economic incentives to reduce waste. There are also very few regulations or other frameworks in place to manage waste from an environmental perspective. However, some countries, particularly Qatar and the United Arab Emirates have developed some infrastructure and policy around waste and other countries are following their lead. However, these developments are relatively new and it is unclear how they will impact the region. Qatar was the first country in the Middle East to develop a waste to energy facility in 2011.

Following the general review of waste issues in the region, the chapter then moves forward with a fascinating discussion of the waste situation in the following countries:  Kingdom of Saudi Arabia, Qatar, Sultanate of Oman, Kingdom of Bahrain, Arab Republic of Egypt, Hashemite Kingdom of Jordan, and the Republic of Iraq. I cannot review the situation in each of these countries in this brief summary. However, for each country, Zafar discusses the waste management situation, the state of affairs, and innovative projects underway. There are some encouraging things happening in each of these places, but there are definitely challenges given the lack of strong infrastructure in place for waste management throughout the region.

The chapter concludes with an interesting discussion of lessons learned and challenges and barriers. The author points out that one of the biggest issues with waste in the region is its widespread generation. Consumption rates are increasing and there is a need for a broader conversation about the region's sustainability goals. Waste should be one piece of. a broader sustainability agenda. In addition, the article points out the need for public private partnership given the lack of infrastructure in the region. However, there is also a need for more public participation, legislation, and funding for waste management projects.

2. Zafar lists 5 key factors that are responsible for the waste crisis in the Middle East. What are they?

3. Why is recycling a challenge in the Middle East?

4. Saudi Arabia has an interesting waste composition. What strategies could be used to address waste reduction given the composition presented in the chapter?

5. Qatar is one of the few countries in the region with a national waste management strategy. What is the strategy?

6. The Sultanate of Oman has one of the highest per capita waste production rates and one of the lowest recycling rates. What types of problems has this created for the country?

7. Explain the role of the Zabbaleen in waste management in Cairo.

8. Overall, what is the outlook for waste management in the Middle East?