This is the eighth post in this blog series, Sustainability Case Studies, that is based on the book The Palgrave Handbook of Sustainability:  Case Studies and Practical Solutions edited by Robert Brinkmann (yours truly) and Sandra Garren and published by Palgrave Macmillan in 2018. Each post in the series will comment on the content of the chapter as well as some general take-aways or practical teaching or personal/organizational initiatives that could be gleaned from the chapter. Links to previous posts on the series (including the post that introduced the series) follow after the chapter review.

Today's post is on Chapter 8, Air Pollution and Greenhouse Gas Emissions in China:  An Unsustainable Situation in Search of a Solution, by Haakon Vennemo of the Oslo Metropolitan University and Kristin Aunan of the Centre for International Climate and Environmental Research in Oslo. The air pollution problems in China are rather notorious well documented. This chapter provides great context for understanding the present situation. 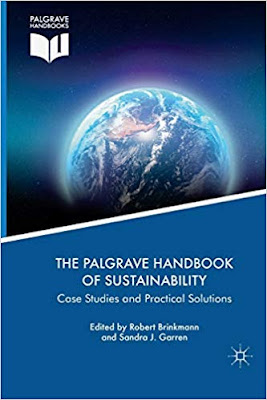 The first time I flew into Beijing, the air pollution near the airport was so bad that I didn't realize we were near the ground until we were a few dozen feet above the runway. Once on the ground, the air smelled like smoke and I could tell I was inhaling lots of particulate matter. Indeed, as the chapter points out, particulate matter is one of the major issues associated with China's air pollution.

The chapter begins with a review of some basic information about about air pollution and China's air pollution problems. For example, the authors note that coal is the major culprit in producing particulate matter throughout the country. The coal is burned not only in power plants, but also in households. The authors also point out that over 1.5 million premature deaths occur in China every year do to air pollution (based on 2016 numbers).

The chapter moves on to discuss the distribution of air pollution in China as well as air pollution trends. The most hard hit areas are to the north and east, particularly near the capital. The good news is that while pollution levels remain high, they are decreasing. Indeed, even indoor air pollution is decreasing--largely because many Chinese households are switching from coal or biomass (wood) fuels to natural gas or electricity.

Unfortunately, greenhouse gases during the period of study have increased. In fact, they doubled between 2001 to 2013--a time period of tremendous economic growth and modernization in China. Even so, the government is setting reduction targets for greenhouse gases and other pollutants and there are serious efforts underway to make substantial reductions. However, it is unclear if the reductions will be successful in the short term given magnitude of the problem and the complexity of the solutions. The uncertainty of China's economic future has slowed China's development and thus there is some hope that pollution will decline as China's economic engine wanes.

Like the other chapters, the chapter concludes with sections on lessons learned and challenges and barriers. The good news is that the Chinese public is much more aware of pollution issues than they have been in the past. Plus, technology is advancing rapidly that will help to reduce pollutants admitted from stationary sources. However, there are some real challenges to improvement that are especially related to China's top-down policy. For example, energy prices do not reflect the true environmental costs associated with their production and use.

Here are some discussion questions that can be used when using this chapter in a lesson on China's pollution challenges.