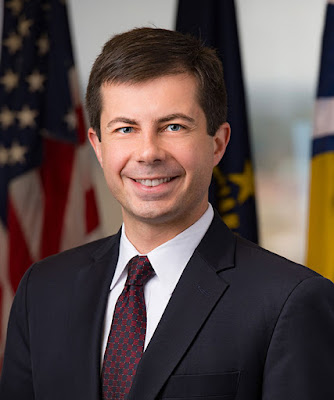 Given the accelerating evidence for climate change, it is not a surprise that the topic is getting attention among the presidential candidates currently running for office. Most of the major candidates have released a plan or at least a statement as to what they will do on the issue if they were to enter office. Today I continue my series that looks at each of the plans of the major candidates to highlight what I see as their pros and cons. Please note that the review of the plans is not meant as an endorsement or rejection of any of the candidates.

The series continues today with Pete Buttigieg's climate change plan which you can read here. My review of previous candidate's plans follows at the end of this post.

Like many of the other plans, Buttigieg's notes the dire situation we are facing with climate change. What sets his introduction apart from many of the others is that he frames the issue as a way to unify rural and urban America under a patriotic endeavor that seeks to continue the greatness of our country. As we will see, he very much looks at climate change as something that impacts all people of our country and not just those who are on the front lines in coastal areas.

The plan has three main pillars

The clean economy piece has several main targets including 0 emissions electrical generation by 2035, 0 emissions for passenger cars by 2035, and 0 emissions industrial activities by 2050. He provides details on how we are to get there such as the development of significant research and development funding, a clean energy bank to fund green energy projects, and my favorite, climate action bonds, to allow people to invest in these types of projects. Compared to Andrew Yang's climate plan, Buttigieg's plan is a little lite on specifics but strong on government programs. In other words, Buttigieg's plan builds the bureaucracy around which Yang's proposals could work.

The clean economy piece also focuses on improving energy efficiency--an important aspect of any climate change plan. He also delves into carbon capture--an area that I'm meh about given the overall limited success in this area. He also discusses the need to invest in agricultural initiatives given the likelihood of major agricultural shifts. One of the surprises in the plan was a massive increase in funding for Agricultural Extensions. These offices were extremely important when farms were small and individual farmers needed support. Now, with the advent of agribusiness, I'm not sure that the extensions are the best places for investment.

The final piece of the plan focuses on leadership. It highlights the need for a national climate summit and a return to major international climate agreements abandoned by the current administration. In addition, Buttigieg rightly notes that the US military has quietly become one of the major areas of competency in the area of climate change in the United States and seeks to have the military take a larger role in the conversation on climate change in the US and around the world.

There is much more in the plan that I cannot cover here. Overall, there are some great things in it. Clearly, given the fact that Buttigieg has served as a mayor in Middle America, he has a unique perspective that seeks to build a bureaucracy to help solve a problem that impacts all of our nation. I would have liked to have seen a bit more detail on some of the plans. I am not saying that the plan needed the level of detail of Andrew Yang's plan, but I kept wanting to see more information. For example, Buttigieg's plan briefly mentions airplane emissions but doesn't have any details about how to address them. In addition, some of the plan reads as if he compiled several good ideas to fit within an overall plan without articulating how they work together. As you read it, you will see that he even calls sections of his plan by the name of the person who developed it or introduced it to congress.

I do think Buttigieg's plan stands out for its efforts to address the needs and concerns of rural America and its framing of solving climate change as a patriotic initiative. It is a little light on detail and high on bureaucracy.

Look for a review of another candidate's climate change plan in the next week or two.

(For those of you teaching environmental science, environmental policy, or sustainability this semester, you may wish to follow along or assign your students the reading of the various plans I will be posting to allow them to evaluate them as an exercise.)