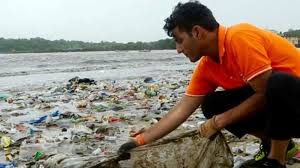 I always get inspiration from individuals who work selflessly to improve the environment. Over the next month or two I will profile five environmental heroes on Twitter who give me hope and inspiration.

To kick off this series, I would like to introduce you to Afroz Shah. Every weekend since October, 2015 he has organized beach cleanups in or near Mumbai, India, a coastal city on the Arabian Sea. Mumbai is India's largest city and its financial center. The broader metropolitan region has a population of approximately 22 million people.

Since he started the beach cleanups, Afroz has collected thousands of tons of trash, given many lectures, and planted many trees along the beach. He started his work with a friend, and now he often attracts hundreds. He gives lectures on pollution and his work has gotten tremendous public attention in India. He is changing the way the public thinks about waste and he is improving public policy. In 2016, the United Nations named him a Champion of the Earth. He has had some challenges along the way, but he has persevered and continues to be an inspiration in India and around the world.

He is a wonderful example of how one person can make a difference.

If you are on Twitter, follow him at @AfrozShah1 He posts regular updates of his beach cleanups and he provides real numbers on the difference he is making in the region.

If you have someone you think I should profile, please leave a comment.
at March 04, 2018