The Dakota Access Pipeline -- Part 6. The Legal Issues and the Protest

Over the next week or two I will post several essays and resources on The Dakota Access Pipeline controversy. My goal is to provide some materials for those interested in teaching or learning about the issue. The set of posts can be used as introductory reading materials in classes or they can be mined to select content of interest. In addition, I hope that the posts will be useful not only for teachers and students, but for those interested in the topic who are readers of On the Brink. I have found that most people do not fully understand the complexities of the issue and some of you may find the content interesting, if not enlightening. If anyone finds any errors, please let me know so that I can update the posts for accuracy. Please note that I will try to link as much as possible to primary resources that can be used for supplemental material or further reading. In addition, for each section, I have included questions that can be used for in-class discussions or homework.

The series will consist of several parts:

Part 1. North Dakota
Part 2. Boom! Fracking and the Bakken Shale
Part 3. The Pipeline Project
Part 4. The Heart of the Matter:  The Missouri River
Part 5. The Standing Rock Sioux
Part 6. The Legal Issues and the Protest
Part 7. Ethical Considerations and Conclusions

The last five posts provided a geographic and historic context for understanding some of the issues associated with the Dakota Access Pipeline controversy. In today's essay, I focus specifically on the legals issues and close with a summary of the status of the protest.

In my mind, there are three distinct legal issues associated with the Dakota Access Pipeline in the context of the Standing Rock protests.

While there are other issues, these three themes have emerged as the main points of contention. Each will be briefly reviewed.

As noted in yesterday's post, the site where the pipeline is proposed to cross, or more accurately go under, the Missouri River is one-half mile upstream from the border of the Standing Rock Indian Reservation in land that can be classified as "unceded territory". This land, described in the Treaty of For Laramie of 1868, noted that some areas outside of the reservation were unceded and thus an unclear compromise zone. Since 1868, the Sioux never officially gave up rights to the land. Nevertheless, the land was given away by the government to private land holders. The Sioux continue to claim the territory. They took their land claim to the Supreme Court in 1980 and won the case. However, one of the outcomes of the case was that the Supreme Court decided that the Sioux should be paid for the land and ordered the U.S. to pay the Sioux the just value. The Sioux refused the money and continue to claim the land. To the U.S. government, the pipeline is going through private property. To the Sioux, it is going through land that they never sold or agreed to give away. The land was taken from them in direct opposition to the rules of their signed treaties. However, from the pro-pipeline perspective, the company believed that they had all permits in place to construct the pipeline on privately owned property. The Missouri River crossing is one of the last pieces to complete.

When the pipeline was first proposed, it was designed to cross the Missouri River upstream of Bismark, North Dakota. The Army Corps of Engineers rejected the route because in case of a leak, the project would harm the water supply of Bismark. As a result, the pipeline was rerouted to cross just 1/2 mile north of the border of the Standing Rock Indian Reservation. This is widely seen as an environmental justice issue by many in the environmental community. The Missouri River is the main source of water for the people on the reservation. It is standard practice to get input on large projects like this from the impacted communities. In fact, the U.S. has rules that require special consultation on issues that can impact tribal lands as per a 2004 Executive order by George W. Bush. The pipeline company believes they did their due diligence in trying to consult with the Standing Rock Sioux in working to attain the permits to cross the Missouri upstream of the reservation. However, from the Standing Rock Sioux' perspective, the consultation was not adequate and as a result the permit should never have been granted.

Large projects like a pipeline need to undergo not only an environmental assessment, but also an archaeological evaluation to determine if the project will disturb any important archaeological resources. Typically, this is done by standard archaeological survey techniques, but in cases when there are Native Americans living in an area, they are usually consulted as well. According to many sources, a basic survey was completed that noted the lack of significant archaeological remains on the construction site. However, when the Standing Rock Sioux noted the presence of sacred places, stone rings, and burials, the state did not take this information into account and construction crews bulldozed the site. This action came to the attention of the archaeological community in the United States and prompted the Natural History Museum to start a petition denouncing the destruction of the sacred site. The petition letter notes that the destruction of the site is against federal law, specifically the Native American Graves Protection and Repatriation Act.

Given these three issues, the Standing Rock Sioux believe that the pipeline is moving forward illegally. To prevent its construction, they have organized protests that continue to this day.

At this point, it is important to note that those in the field working against the pipeline do not identify as protesters. They identify as Water Protectors. They do not see themselves as against development, but for protection of the earth. Certainly as part of the pro-earth agenda, they are against the pipeline, but they frame their action as a protection, not a protest. Certainly, by definition, their actions are within the realm of protest and civil disobedience. But I want to note that their is a distinct difference in how they perceive themselves and how they are sometimes portrayed in the media.

USA Today has a timeline of the project and associated protest here. The pipeline company is adamant that they are moving forward and the Water Protectors are adamant that they are staying. The Standing Rock have been joined by many in the environmental movement who are concerned about global climate change and pollution. There have been hundreds of arrests at the site and the police have used rubber bullets, tear gas, and water cannons against protestors. See the video below for interviews with some who are on the site.

The protests have spread throughout the country. In New York, there have been several events supporting the Standing Rock Sioux. A colleague of mine, Heidi Hutner, who is in charge of the Sustainability program and an Associate Dean at Stony Brook University has gone to some of the events. I asked her, What is it about the situation that calls you to action? Her response was, As a mother, I feel a deep spiritual call to unite with and support the mothers and women and indigenous people at Standing Rock, who are standing up for Mother Earth and Future generations. This battle is not about indigenous rights alone (although this is vital and enough is enough regarding the oppression and domination of native peoples). All people must come together now. All must stand up and act as loving warriors to protect our earth. We have one home. Earth. We are destroying it. The destruction must stop. As Casey Horinek-Camps (Ponca Elder, grandmother and mother) says, native peoples "are the first environmentalists." We must support and follow their lead. That's what Standing Rock means to me. I have spoken with many who feel the same way as Dr. Hutner. The Standing Rock issue has galvanized the environmental and social justice community in ways I haven't seen in some time.

There is growing national and international support for the Standing Rock protesters. As winter is starting to set in, there does not seem to be any abatement in activity. Both sides are digging in for a long winter. CNN's Sara Sidner posted this live report from the site on November 30th that provides a good review of not only the conditions on the site, but also the current issues.

1. Which side do you think has the most legal standing on the land ownership issue, the pipeline company or the Standing Rock Sioux? Why?

2. Take a look at this document Suggested Best Practices for Industry Outreach Programs to Stakeholders published by the Federal Energy Commission Office of Energy Projects Division of Gas, Environment, and Engineering. It provides guidance on how to conduct outreach to stakeholders who are impacted by large projects like pipelines. Based on information in the document, who or what is a stakeholder? What are the appropriate procedures for outreach to stakeholders?

4. The people protesting the pipeline project near the Standing Rock Indian Reservation see themselves as Water Protectors. Why do they utilize that appellation?

5. Protests in support of the Standing Rock Sioux have occurred throughout the country and throughout many parts of the world. What types of protests took place in your community or state? How do they differ from other types of historical protests?

--------------
Note, if you like this series, you may like my textbook, Introduction to Sustainability available from Wiley. 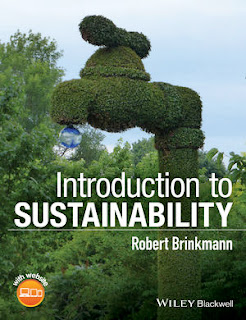