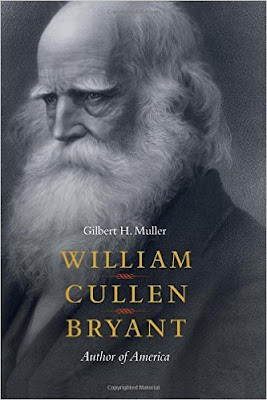 In today's world of breezy and dramatic non-fiction historical and biographical offerings, it is hard to separate the authors from their subjects. The trend in non-fiction seems to veer toward finding ways to make the author and reader feel comfortable tension in the complexities of the past via violet pastilles that last through a formulaic 200 pages or so. Readers are urged to look with new critical eyes on the actions of long dead actors based on a myriad of factors such as class and geography. These approaches often reframe history in ways that would be completely alien to the individuals who participated in it. While such exercises are useful and can provide new insight, the heavy lifting of historical and biographical work is sometimes lacking in such endeavors.

Gilbert H. Muller, in his masterful biography, William Cullen Bryant:  Author of America, does some heavy lifting indeed and shows that that art of biography is not dead. His detailed and finely referenced work provides a largely chronological review in seventeen chapters of the life of the accomplished poet and editor. It is interspersed with Bryant's own writing and contemporary quotations of others. Throughout its 410 pages, the reader is brought to a deeper and more fulfilling understanding of Bryant and his times in subtle ways without thematic overtones alluded to in the previous paragraph. Images of Bryant and his contemporaries are included in several plates.

Bryant, of course, is considered one of the great literary and editorial figures in American history. He lived from 1794 through 1878 and thus traveled through the important formative and violent years of our country. He knew some of the founding fathers, Lincoln, Hawthorne, and even a 20th century president (Benjamin Harrison). Through his extensive travels, he was acquainted with many of the great international intellectuals of the era.

Of relatively humble New England origins, Bryant first became widely known as a poet and essayist. His work is clearly framed within the early romantic tradition of American poetry and he deeply influenced later writers like Poe and Whitman. He was one of the intellectual forefathers of the nineteenth century transcendental movement that promoted idealization of nature and its impact on the human mind which reached a tumultuous conclusion with John Muir. His poetry often considered environmental themes with emotional overtones. His extensive experience hiking in beautiful regions of New England and the Hudson Vally influenced his writing.

As a young adult, he settled in New York City. Here, Bryant was much more than a poet. In 1829, Bryant took on the editorship of the New-York Evening Post, a paper founded by Alexander Hamilton and now known as the shamefully sensationalist New York Post, when he was just in his mid 30's. Bryant built the modest paper to a highly profitable publishing powerhouse. Through his editorial pieces, he became highly influential in national and international politics and culture. He could elevate individuals, which he did when he introduced Abraham Lincoln to New York prior to his nomination as Republican Candidate for president, and he could destroy those he found problematic, as he did to Fanny Wright, the noted early feminist utopian writer and speaker.

Bryant was also a Long Islander. He found a refuge in Roslyn, New York, near my home. He owned a beautiful estate called Cedarmere on the shores of Hempstead Harbor. Here, he was close enough to New York City that he could dash in for emergencies if needed, but far enough away that he could stroll the beautiful maple-lined trails along the rolling hills of the glacial end moraine that defines the north shore of Long Island.

Muller, in his thoroughly researched book, highlights how Bryant was equally at home in New York and at his Long Island retreat. Bryant reflected the reality of many living in 19th century America who had rural roots with increasingly urban experiences. Because of his extensive connections and experiences, and due to his longevity, Bryant's life provides a suitable tableau from which one can gather lesson on 18th and 19th century American history. The biography appropriately excogitates on Bryant's rural and urban character while flavoring it with his international outlook.

I first ran into Bryant's work when I wrote a short piece on his later work, Picturesque America for the Wisconsin Academy Review back in the 1990's. As I got to know Bryant, I was struck by how much he influenced American intellectual thought of the nineteenth century. When I moved to Long Island and the greater New York City region five years ago, I started to understand how much Bryant meant to the region. He defined how to be a New Yorker and set the tone for intellectual and political discourse in the city.

Bryant's noted love of walking and his extensive experiences throughout New York and Long Island indulge anyone interested in the natural intersection of geography and history with ample opportunities to explore Bryant's world. Muller provides detailed geographic information on where Bryant spent his time in the city and Long Island. One can visit historical sites that he influenced and that had great influence on him. While he may be known for Bryant Park in midtown New York, he had little influence on that site. The naming of that park was perhaps a consolation prize for the lack of an eponymous opportunity in Central Park, a park for which he advocated strongly in editorials and speeches due to the lack of significant public park land in rapidly expanding New York City.

As Muller deftly demonstrates in his biography, Bryant was the "Author of America" as James Fenimore Cooper called him. He shaped so much of the American written landscape that it is difficult to ponder 19th century American history without him. This biography should be present on any bookshelf that considers American and New York history, American literature, or environmental thought. While it is not a breezy read, it is a thoughtful one that will nourish the minds of readers seeking something more substantial than the carb laden non-fictional biographical offerings in today's bookshops.

Recent On the Brink book reviews:

Abbey in America: A Philosopher's Legacy in a New Century
Finding Abbey: The Search for Edward Abbey and His Hidden Desert Grave
In the Heart of the Sea
Women Pioneers of the Louisiana Environmental Movement