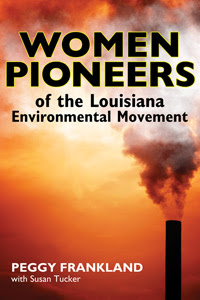 When I would regularly drive from Florida to Northern California for fieldwork in the early 1990's, my first overnight break would be somewhere on I-10 near the Louisiana/Texas border in the heart of the oil industry of the Gulf Coast. I would pull into a cheap hotel near the interstate around 9 or 10 at night and collapse from the exhausting drive. However, upon entering my hotel room on one of those nights, I was confronted with the realities of the petroleum industry in the region.

Upon further inspection, I realized that there was oil permeating the carpeting. Even though I was extremely tired, I knew I couldn't sleep in the room. It was clearly used by transient workers in the oil industry and the oil on their work clothes and shoes irrevocably polluted the room.

I was passing through. Those who live in the oil-rich regions of the Gulf Coast live with pollution every day.

The book Women Pioneers of the Louisiana Environmental Movement by Peggy Frankland and with Susan Tucker, explores the lives of women who worked to try to protect their communities via oral histories and personal commentary. The book focuses on the lives of thirty six women activists as well as several other men and women who were in leadership positions with government or non-government organizations.

The authors selected the women based on several criteria, "...she had to be active between 1976 and 1996, the era when the national grassroots environmental movement was just beginning. Second, each woman had to have improved Louisiana's environment by changing a law, policy, or major land-use project or by founding an environmental organization. Third, each woman's work had to take place without institutional support."

Given these criteria, the book takes a somewhat narrow definition of what constitutes a pioneer. In Saving Florida:  Women's Fight for the Environment in the Twentieth Century, the author Leslie Kemp Poole takes a much broader temporal look at women who were engaged with the development of the Florida environmental movement. She highlights the work of women in not only those crucial days of the last quarter of the former century, but also those who worked diligently through the entirety of the 1900's. Thus, the term pioneer is somewhat limiting from an historical perspective and excludes those pioneers who worked on a number of environmental issues in Louisiana prior to 1976.

Nevertheless, the oral histories of the women in Frankland and Tucker's book provide a distinct glimpse into a particular time and place that is extremely useful in understanding the development of the modern environmental movement. These important women tell riveting, and sometimes chilling, accounts of their battles for better environmental regulation and equity. The book is particularly significant since Louisiana is widely considered one of the most polluted regions in the developed world. We learn how women were instrumental in fighting back against a governmental and industrial partnership that attempted to block many attempts to promote sound environmental management.

With the focused time of the book (1976 to 1996), it is no surprise that the majority of the women activists worked on pollution issues. This era was a time when the rules developed by the EPA under the authority of the Clean Air Act, the Clean Water Act, and various other congressional laws were expanding in scope. Many states were working with the EPA to push for stronger rules and regulations. For example, California state laws were often ahead of the EPA in efforts to protect the environment. Louisiana, unfortunately, was not one of these leaders.

Indeed, it is evident through the oral histories that many, but not all, of the state's political leaders were hostile to environmental regulation. One governor, for example, blamed Louisiana's notorious cancer clusters on the spicy diets of Louisianans. In Louisiana, the petroleum industry along with the associated chemical industry are the largest employers and the largest donors to campaigns. It is not particularly surprising that in the America of the late 20th century that politicians catered to the desires of industry and less to the health concerns of their constituents.

Many of the women profiled in this book recount a Louisiana that was very different from today. They recall a cleaner environment where you could eat crawfish collected from ditches without worrying about industrial pollution. They didn't have to concern themselves with alarm evacuation bells from nearby chemical plants. And they didn't have to wonder if their families were at risk from unusual diseases or cancers.

The onset of the industrialization of Louisiana seems sudden in their memories. Many of the women were housewives who became activists after they discovered a nearby environmental threat to their families and their homes. Many of them did not consider themselves as environmentalists and most of them would never have gotten involved if they did not  recognize the clear and present danger to their children. However, once they started, these women worked hard to right the environmental wrongs.

Yet as we see in the narratives, not all people are exposed to environmental risks in the same way. Chemical plants and dumps in Louisiana were disproportionately located in poor communities of color (this is very distressingly detailed in the book, Deceit and Denial: The Deadly Politics of Environmental Pollution by Gerald Markowitz and David Rosner ). Many of the most vulnerable populations in the state were most impacted by the high-tech pollutants that the least vulnerable created. Within this unequal system, several women, both black and white, rose up to fight the inequality.

Within this context another important theme emerges in the book--that of cooperation. Many of the women relied on each other for support. They helped each other in their environmental activism and with familial duties. This cooperation inadvertently helped to share the risk that lone activists take in challenging the status quo. By working together, the women were a harder target for those seeking to diminish the reputation of an individual. While industry tried to discredit some of these women, by working together, they were able to shield most of the individual harm. Given the efforts of some to label Rachel Carson an "hysterical woman" in the early 1960's, these women were wise to band together.

At the end of the day, however, these women made tremendous contributions to eliminating and reducing some of the worst pollution problems in the United States and we are all better for their efforts.

While it might be easy to remain negative about the state of the environment in Louisiana, particularly after the Deepwater Horizon Oil Spill, the book gives great hope. There are many woman who daily put great effort into improving Louisiana for future generations.

Back on my trip across the United States, I was able to convince the hotel clerk to move me out of my oil infused room. These women were not able to so easily switch their proverbial rooms by moving outside of Louisiana. In fact, these women fought so hard because they love their state and its natural environment.

In many ways, this book is composed of dozens of powerful personal memoirs that inspire us to continue the good fight. The women accomplished great things by taking on governors, local politicians, scientists, and industrial leaders. This book not only records an important time in Louisiana history, but also inspires us all to do more.