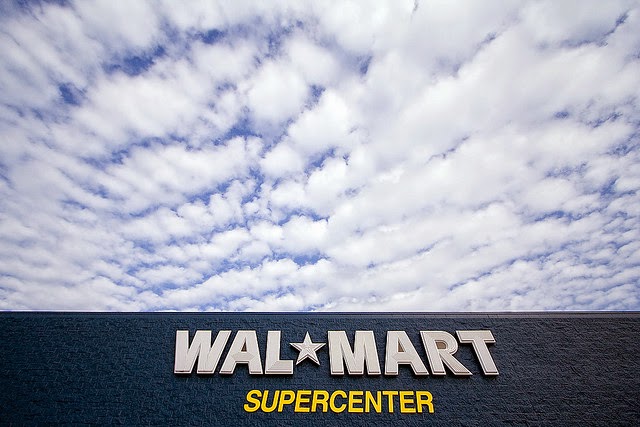 According to this New York Times article, Wal-Mart plans to jump into the organic market in a big way.

Wal-Mart attracts controversy around its sustainability efforts.  Many, including myself, applaud the organization's many sustainability initiatives.  They were one of the first major companies to embrace sustainability and have impacted supply chains, building policies, and transportation across the retail market.  You can read their sustainability report here.  They created three sustainability goals:  to create zero waste, to use 100% green energy, and to sell products that sustain customers and the environment. They also have a sustainability hub that provides information for their suppliers on how they can help contribute to Wal-Mart's sustainability initiatives which include things like reducing hazardous chemicals, significantly reducing greenhouse gases, and increasing the recycled content of plastic products.  Their efforts are quantitative and transparent.

Some dismiss Wal-Mart's efforts as greenwashing.  They note the impact that they have on small businesses and their overall labor practices.  Certainly they can be critiqued on these issues.

However, compare Wal-Mart's efforts with any other large retail organization and I doubt you will find any company doing as much.  One exercise I give my students (professors and teachers, try this one yourself in your classes) is to ask them to compare Wal-Mart's sustainability efforts with any other large retail chain.  At the start of the exercise they think that Wal-Mart is a horrible organization.  But at the end of it, they usually find that Wal-Mart is doing more than most big box stores.  Very few companies out there focus on issues like waste reduction, greenhouse gas pollution, and organic food.

I hate to say it, but I think some of the criticism of Wal-Mart comes from a little bit of environmental elitism.  I know we all love our small organic local farms and we love the idea of community sponsored agriculture.  However, not everyone has access to these institutions.  Wal-Mart is bringing sustainability to the average person and I think this is wonderful.  Sure, I have some of the same critiques of Wal-Mart as others on issues of small businesses and wages.  But Wal-Mart has transformed the way that big box stores approach the environment.

So while some may look at Wal-Mart's move into organic with a cynical eye, I wholeheartedly approve.  And no, I am not on Wal-Mart's payroll.
at April 16, 2014

I am divided about Walmart, I have to go there to get organic and other vegetables in my area like leeks. It is my primary reason for shopping there. The gardens and roadside stands of the previous generation are gone. The local farmers market at I
cc is underserved. At this point Walmart is it for veggies, besides gardening oneself

I think this is great news. Easy target to dis Walmart but the more organic options the better. Hopefully they will have Freshana Organic Solutions' products on their shelves shortly as well.