For years I've been saying that the real action on sustainability in the United States is at the local level and this was on display in big ways last night on the Hofstra Campus.  Our National Center for Suburban Studies as well as the League of Conservation Voters co-hosted a candidate forum on sustainability.  There was standing room only in the student theater on campus.  Nearly 400 citizens attended.  There is a hotly contested election for Nassau County Executive that is underway in our county and last night's forum was part of the process. 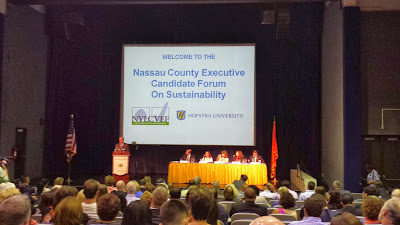 I don't want to speak about any individual candidate.  However, let me just say that both the Republican and the Democratic candidates spoke intelligently about climate change mitigation, green energy, water quality, pollution, transit, and a wide array of other topics.  Indeed, there was really very little difference between the two candidates on most of the major topics that were discussed.

Now take a look at what is happening at the national stage where the government is largely shut down and where discussion of climate change or green energy is often derided by one party.  That is why all the serious bipartisan action on sustainability in the U.S. is taking place at the local level and sometimes the state level.  All of the major impacts are being felt in local communities and there is usually consensus in local governments about many of the key environmental issues facing our nation.