Recently I had the opportunity to attend two important events associated with greening the United States.  The first was a Brookings Institute forum on green jobs associated with their green jobs report.  The second was a conference on suburbs and the 2010 census.  I’ve already provided commentary on the first.  However, the issue that became abundantly evident to me after attending both meetings is that the U.S. does not have a good definition of suburbs.
Here’s the issue.  For classification purposes, the US Office of Management and Budget and the Census organize urbanized areas and their surrounding regions into metropolitan statistical areas that have boundaries that are county in scale.  Multiple counties can be in one metro.
Thus, when metropolitan areas are being compared for policy purposes, it is not the cities, but the entire metro that is counted. For analytical purposes, most researchers divide the metros into urban and suburban communities.  The suburban areas are all the areas outside of the primary cities in the metro. Let’s take a look at some issues that emerge.
The Tampa-St. Petersburg-Clearwater metro includes Hillsborough, Pinellas, Pasco, and Hernando Counties and is an interesting metro to examine to point out some of the issues that concern me. 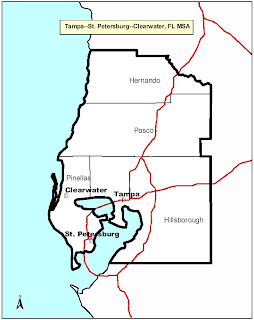 Let’s first look at the character of the counties.  Pinellas is Florida’s most densely populated county.  Almost all of the land is developed.  In contrast, Hillsborough County, even though it contains the City of Tampa with over 300,000 people, contains extensive areas of agricultural and mining activities giving large areas a clear rural character.  While Pasco County has seen extensive development in the last two decades, Hernando County retains its rural character.  But, for analytical purposes, all of these rural landscapes would be counted as suburban using the definition utilized by many researchers who utilize the non-urban areas of metros as their definition of suburbia.
Another issue is one of definition of urban.  Brandon is an unincorporated census-designated place in Hillsborough County that has a population roughly equivalent to Clearwater.  However, it is not counted as urban in most statistical classifications.  Yet, the landscape of Brandon is very similar to most areas of Clearwater and is essentially indistinguishable from Tampa.  It is statistically counted as suburban even though it is more like a Florida landscape that would be counted as urban.
The problem becomes even more evident when metros are compared—an exercise that happens all the time.  Below are two maps:  one of Arizona and the other is the metros in Wisconsin.  The Phoenix metro consists of two counties, Maricopa and Pinal.  But, the county sizes in Arizona are much bigger than the county sizes in Wisconsin.  This makes the metros in Arizona some of the largest in the U.S.  Comparing the two regions is like comparing apples and oranges.  But, it happens all the time.  Due to the comparisons, there are real policy decisions that are made which means that dollars, time, and talent are associated with these decisions.

The bottom line for me is that we do not do a good job defining suburbs statistically in the United States.  We all know what they are and what they look like, but we do not capture this understanding within the current spatial boundaries employed for statistical purposes.
at July 23, 2011